With its rise in Popularity in the world, more and more people are becoming fans of Japanese sake these days.
We have shops and restaurants from abroad directly ordering our KOSHIGOI.

How is Koshigoi being perceived outside Japan?
We interviewed the owner of the popular casual dining restaurant in Australia, Tsunami Japanese Restaurant. 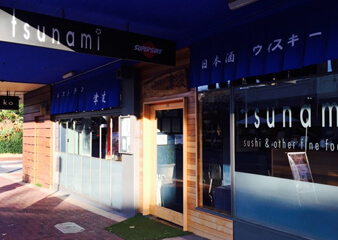 「Tsunami Japanese Restaurant」
The appearance of restaurant is so traditional that you would wonder if you were in Japan.

Tsunami Japanese Restaurant opened in 1998 as a casual dining restaurant to serve Japanese food. We also host a variety of events and parties, such as weddings, birthday parties, and hens-nights(a party held for a woman the night before her wedding).We have a broad range of customers from Australians to non-Australians, friends, couples, families, children and the elderly.

The head chef Tetsuya Sakamoto has a culinary experience in Japan; It's been 16 years since he became the head chef after he moved to Australia in his 20s and then worked in Perth, Melbourne, and Dubai.We've known each other for over 20 years, and he himself is a fan of Japanese sake.We enjoy sake with other restaurant staffs after the restaurant is closed. 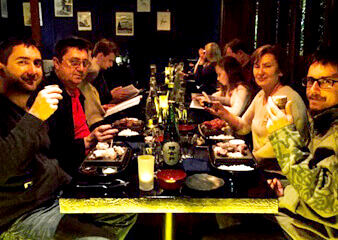 Many people visit the regularly-held sake festivals and enjoy Japanese food and sake.

THE FRAGRANCE OF KOSHIGOI JUNMAI GINJYO YAMADANISHIKI WAS ESPECIALLY AMAZING

It was FOODEX JAPAN held in Tokyo Big Site in 2015 when I first was introduced to Koshigoi. There I happened to see Koshigoi and had a sampling of the brand for the first time.
The fragrance of Koshigoi Junmai Ginjo Yamadanishiki was especially amazing and truly eye-opening. Also their plum wine was very good.
It was helpful also that Mr. Yoshino was able to speak English. There I had a great conversation with him and learned about Koshigoi.
Soon after the first meeting with Mr. Yoshino in FOODEX JAPAN, I made a trip to Yoshino-Shuzo to see the brewery in person. Then Mr. Yoshino and I had a discussion again to share a passion for sake brewing. I decided to purchase Koshigoi sake. 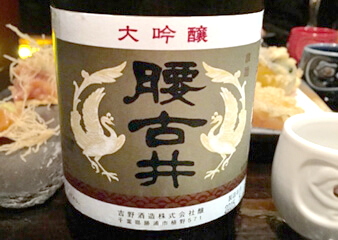 With the delightful fragrance and smooth flavor, Koshigoi Danginjo, being harmonious with not only Japanese food, but also Western food, is very popular among the customers.

SAKE ENJOYED BY EVERYONE

Many people in Australia are still not familiar with Japanese sake. We have customers requesting sake from curiosity saying “ I would like to try sake since I came here to eat Japanese food. ”Koshigoi Junmai is the one to suggest to such customers because it goes well with meals for its well balanced flavors, making it approachable to beginners.

Furthermore, Koshigoi Daiginjo plum wine is very popular in Australia. Last year it was sold out immediately after it arrived in the restaurant. Although I hear quantity is limited due to hand-crafting, I would like to import more next time if possible. 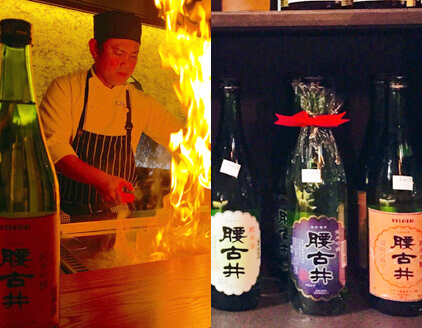 Head chef, Tetsuya Sakamoto
He is so popular that he has regular customers visiting for Japanese food prepared by him. Shelves in the restaurant
Casual Dining Restaurant For Japanese Food

KOSHIGOI, ALWAYS PLAYING A MAJOR ROLE IN THE EVENTS.

In the future, I would like to see more people enjoy Japanese sake in Australia. Also, I would like our company website SUPER SAKE to grow bigger. 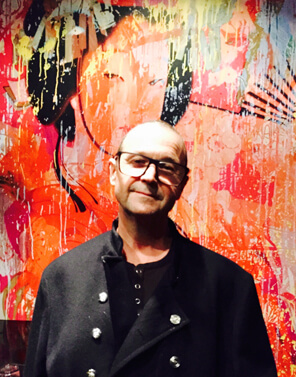 Brett, who used to be a wine drinker just a few years ago, enjoys Japanese sake these days.
One day he tried a junmai ginjo-shu and was eye-opened. He has been a fan of Japanese sake since then.
He travels around Japan, and whenever he finds fine sake,he visit the brewery owner and toji (sake brew-master) in person before he imports those sake into Australia.
He has a deep knowledge of Japanese sake and high sense for food flavors.
Brett- is a passionate owner who is engaged in selecting fine sake with his sharp sense.